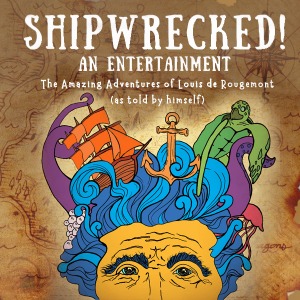 SHIPWRECKED! AN ENTERTAINMENT
—The Amazing Adventures of Louis de Rougemont (as Told by Himself)

The adventurous Louis de Rougemont invites you to hear his amazing story of bravery, survival and celebrity that left nineteenth-century England spellbound. Dare to be whisked away in a story of the high seas, populated by exotic islanders, flying wombats, giant sea turtles and a monstrous man-eating octopus. SHIPWRECKED examines how far we’re willing to blur the line between fact and fiction in order to leave our mark on the world.

“Recreating the pleasures of nineteenth-century platform entertainment with a tart contemporary twist, Donald Margulies’ SHIPWRECKED offers a self-promoting fabulist a forum to inform and persuade, and it delights in both respects.” —Variety.

“The Pulitzer Prize–winning playwright Donald Margulies scampers to the defense of good old-fashioned yarn spinning with SHIPWRECKED. The breathless story of a Victorian gentleman [and] seafaring wanderer springs to life like a theatrical pop-up book.” —NY Times.

Click on the video below to watch director Lori Raffel discuss why she chose SHIPWRECKED for the 2021-2022 Season.